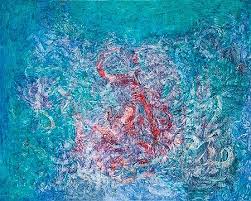 Ahmed Yacoubi continued to develop from what was originally described as a « primitive » style to a highly complex, sophisticated and secret method of layering in oil that amazed viewers and critics alike.
In 1966 Yacoubi moved to the United States, having been divorced from Ruth, and continued to work, exhibit and travel, meeting and entertaining diverse and international artists, writers, collectors, politicians and connoisseurs.

Befriending Peggy Hitch**** and her husband Walter Bowart, owner and publisher of Omen Press, Yacoubi collaborated with friends at their ranch in Tucson and eventually published his first cookbook, « The Alchemist’s Cookbook » that became something of a collector’s item. Returning and moving to New York, thanks to the support of Ellen Stewart (La Mama of the Off Off Broadway theatrical world) Yacoubi lived and painted on Great Jones Street in the East Village where he met the artist Carol Cannon in 1978. They lived and painted together for seven years, parting as friends and still collaborating on exhibits and projects such as the screenplay of his play « The Night Before Thinking ».