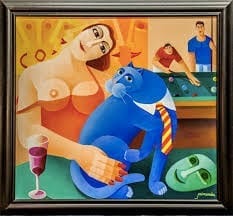 Jaimendes was born on September 9, 1939 in Criciuma, in the state of Rio Grande do Sul, Brazil. He studies at the São Leopoldo Boarding School. At a very young age, Jaimendes discovered that the loved to draw and he recived all the prizes that were awarded in the categories of drawing and painting. He completed his college studies in Rio de Janeiro in graphic design in which he excelled. He succeeded in the field of graphic design at the various advertising firms where he worked in Rio and São Paulo.