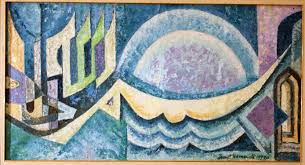 A leading figure in Iraq’s modern art movement, Jamil Hamoudi is recognised for a semi-abstracted art form that creates colourful and dynamic geometric compositions.Through the techniques of repetition, line, and shading, the artist brings depth and movement to the two-dimensional surface and brings into sharp relief the angular forms of Arabic calligraphy and arabesque.

Hamoudi was a member of what is known critically as the huruffiyah movement, a critical term for the regional interest in calligraphy and the Arabic letter that was popular throughout the 1950s and 1960s.

Hamoudi began his career in Baghdad as a self-taught sculptor working in a naturalistic style. In 1944, he began teaching drawing and art history at a school in Baghdad while also attending classes at the capital’s Institute of Fine Arts. The artist graduated in 1945 and two years later received a government scholarship to continue his training in Paris, where he studied at École Nationale Supérieure des Beaux-Arts, Académie Julian, and École du Louvre. In addition, Hamoudi conducted research on Assyrian-Babylonian art and languages. His work is often considered to merge modern European aesthetics—particularly cubism and geometric abstraction— with his own cultural heritage to create a distinct formal language based on the spirituality of calligraphy.

Since his first solo exhibition in 1950, Hamoudi has exhibited internationally and his works are included in numerous museums and private collections worldwide. In his distinguished career, he was also a critic and published extensively on art.